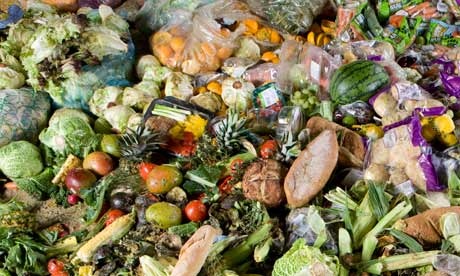 "We all - farmers and fishers; food Porcessers and supermarkets; local and national governments; individual consumers - must make changes at every link of the human food chain to prevent food wastage from happening in the first place, and re-use or recycle it when we can't," said FAO Director-General José Graziano da Silva. - Here... unep.org

Why Are We Wasting So Much Food?

In 2009 UK consumers spent an average of £480 per household on food each year that was then throw away, or 4.1M tonnes of food nationally

Now It is estimated that around one third of all of the food that we produce is wasted, this amounts to around 1.3 billion tonnes of food being lost or wasted each year globally (UN Food & Agriculture Report 2011)

One-third of food for human consumption is lost or wasted between the farm and plate each year. This inefficiency has major impacts on the economy, environment, and people:
It costs up $940 billion per year in economic losses and it exacerbates food insecurity and malnutrition. Food that is ultimately lost or wasted consumes a quarter of all water used by agriculture annually and requires cropland area the size of China. If food loss & waste were a country, it would be the third largest greenhouse gas emitter on the planet behind China and the United States. Food loss and waste generates an estimated 8 percent of global greenhouse gas emissions. Today, more than 800 million people – one in nine globally – are undernourished. Yet more than 1 billion tons of food never makes it to the table.
The first-ever global standard to consistently measure food loss and waste was launched at the 3GF Summit 2016, Copenhagen, Denmark. See Here for further details.

In Britain alone an estimated 15 million tonnes of food wasted from the plough to the plate. Read More ( Real Junk Food Projest Manchester )

Organisations Like The Real Junk Food Project intercepts food that would otherwise go to waste from supermarkets, restaurants and a number of other sources, and turns it into healthy, nutritious meals for anyone and everyone on a pay-as-you-feel donation basis. We are currently running pop-up events while we get our cafe in Manchester City Centre set up. More Info  ( Real Junk Food Projest Manchester )

Food waste is a major issue. We throw away 7 million tonnes of food and drink from our homes every year, the majority of which could have been eaten. It's costing us £12.5bn a year and is bad for the environment too. ( lovefoodhatewaste.com )

Help save the environment simply by wasting less food

Research shows over 60% of us, as shoppers, are concerned about the environmental impact of our food and groceries.

As we look for ways to save money on our household bills many of us aren’t aware that food waste not only hits us in the pocket – almost £60 a month - but has a serious impact on the environment too.

Think of a pack of cheese. The resources that go into raising the cows, processing the milk, transporting the cheese, refrigeration, the fuel we use to drive to the shop to buy it - all this to put it in the bin at the end of the week. In fact in the UK we throw away the equivalent of more than three million slices of cheese a day!

If we stopped throwing this good food away it would save the equivalent of at least 17 million tonnes of carbon dioxide, the same positive benefit as taking 1 in every 4 cars off our roads. ( lovefoodhatewaste.com )

Action on Waste: The Restaurant Sector

Waste is a key issue for restaurants. Food waste represents a cost to the Restaurant Sector alone of £682 million each year including food procurement, labour, utilities and waste management costs, or £3,500 per tonne. (wrap) pdf

UK Food and Drink Waste Arisings Three major WRAP studies carried out in 2013 estimated annual food waste arisings within UK households, hospitality and food service, food manufacture, retail and wholesale sectors
at around 12 million tonnes, 75% of which could have been avoided. This had a value of over £19 billion a year, and was associated with at least 20 million tonnes of greenhouse gas (GHG) emissions. Around 90% (by weight) of the avoidable food waste arises in households and food manufacture, although waste arising in one part of the supply chain is certainly influenced by other parts of the chain.(wrap) pdf