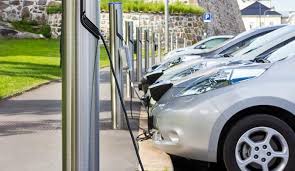 Electric vehicle use in Greater Manchester has rocketed over the past 12 months.